Our community was founded on the rich history of gold mining and early western settlement. 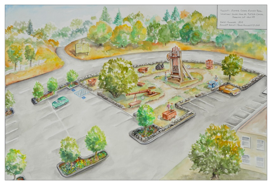 The Sutter Creek Community Benefit Foundation is in the process of transforming one of Sutter Creek’s vacant lots at the South end of Main Street into an amazing historical display of Gold Mining history. Artifacts from the Argonaut Mine and the Sutter Gold Mine have been donated to show visitors and residents the rich Sutter Creek Gold Mining history. Along with the mining artifacts, the new passive park will have informative plaques for the artifacts, picnic benches, trees, and “Chinese” rock walls lining the park, which are historic for the area.

A “name the park” contest was held and on June 1st, 2015 and the new Miners’ Park was dedicated by Sutter Creek Mayor Jim Swift.

This amazing new addition to Sutter Creek will be made possible through the generosity of donations from people who wish to see Sutter Creek’s history maintained.For more information please contact Frank Cunha at frank@sccbf.org or go to sccbf.org.

Restoration of the historic Willow Springs Elementary School on Jackson Road (Hwy. 16) will begin in the spring of 2013. The Amador Community Foundation helped kick off the project with a grant to paint and repair the roof. 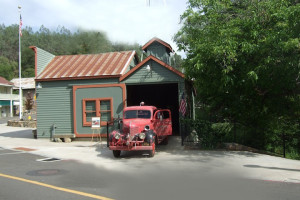 This project is just one of several that the SCFD/SCVFD has undertaken in the past ten years since the inception of their history program in 2005. During this time, SCFD/SCVFD has rebuilt and displayed several pieces of vintage fire fighting equipment; rehabbed and re-equipped the Amador City fire truck, produced a broadsheet style history overview of the SCFD/SCVFD, and relocated the first Sutter Creek fire bell to the Main Fire Station and placed a historic marker related to the bell.

The SCFD/SCVFD have a number of other projects that they would like to undertake and complete to round out the overall history of their organizations. These projects will not only preserve and display the local history, but they will also act as a tourist attraction for Sutter Creek and Amador County as a whole. The projects are:

1 – Repair the existing fire bell tower on Main Street at City Hall and reconstruct the fire hose cart house that was originally located under this bell tower. Display a hose cart in this hose cart house with interpretive signage that tells the history of the bell and the first Hose Cart Company #3.

2 – Recreate the first Sutter Creek fire truck that was built by local mechanics in the 1920’s. Using an early 1920’s era Dodge Brothers light truck, local mechanics mounted a chemical fire extinguisher that had been purchased in 1912, along with a hose reel, ladder and other fire fighting equipment.

3 – Rehab and develop the old Sutter Creek Firehouse on Main Street that was built in the early 1930’s as a museum and display space for the early fire fighting equipment and it would also house and display the bulk of the photographs, maps and posters that the SCFD have assembled since 2005. 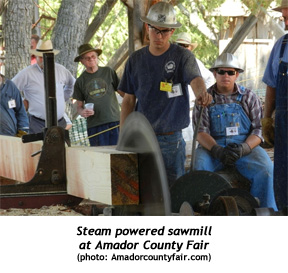 Logging and mining played a key role in the economy of Amador County beginning in the 1800s. California’s only operational steam powered splinter sawmill from that era is owned and operated by the Amador Sawmill and Mining Association, a nonprofit organization dedicated to preserving this bit of our heritage.  The sawmill, operated by volunteers since 1968, is an authentic, antique mill. Sawmills like this were once located throughout Amador County and the Mother Lode region from the 1850s through the 1940s. Historically, lumber from these small sawmills was typically used to shore up tunnels in mine shafts to prevent cave-ins and for sluice boxes and flumes. The Amador Community Foundation granted $500 to help toward the cost of installing a boiler to provide steam to the engine. Now, the working sawmill can be seen on display during the Amador County Fair in July, and is available for custom cut jobs for non-profits, museums, and governmental museums that want rough cut timbers or lumber for historic restoration & preservation projects. 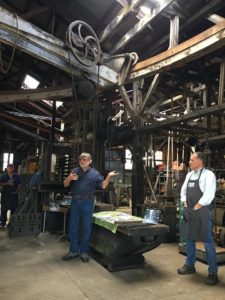 At long last, the Knight Foundry will be preserved forever for our community.

In January 2017 the Knight Foundry Alliance was formed, and is working closely with the City of Sutter Creek, the Sutter Creek Community Benefit Foundation, the Amador Community Foundation, and other local organizations to launch this historic project. This group of City Council members and enthusiastic volunteers has been tasked with implementing urgent security and stabilization repairs.

But there’s an ongoing need, and we hope we can count on you for help. 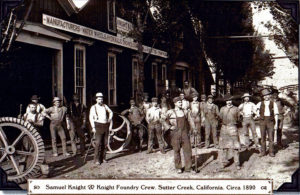 Read the Full Article for much more information .

The Sutter Creek Community Benefit Foundation invites you to participate in Sutter Creek’s new Miners’ Bend Historic Gold Mining Park by buying a personalized engraved brick in the Commemorative Pathway. You and your family will not only provide financial support to the Foundation and help finish this park, but you will cement your place in Amador County’s gold mining history.

The work at Miners’ Bend Park in Sutter Creek continues. By now you have probably noticed the mining artifacts that have been placed at the South end of Main Street. The Sutter Creek Community Benefit Foundation has been working hard to make this historical project a reality and are now building a brick walkway that you can be a part of.

The SCCBF’s goal for completion of this park is early summer, 2016. The Park will feature over a dozen displays telling the story of Amador’s roll in the California Gold Rush. Work is being done on interpretive signage that will give visitors a brief history of the gold rush in Sutter Creek and Amador County, with historic photos and descriptions of each artifact on display.

The SCCBF would like to thank those who have donated time and money to help make this project a reality, especially the Native Sons of the Golden West. The Donor Brick Campaign will help us complete the park. Purchasing a brick is the perfect way to commemorate loved ones, promote your business or organization, honor a special occasion, or find that special gift. Remember your brick purchase is tax deductible. Buying a personalized brick helps the Sutter Creek Community Benefit Foundation preserve our cultural heritage in Amador County.